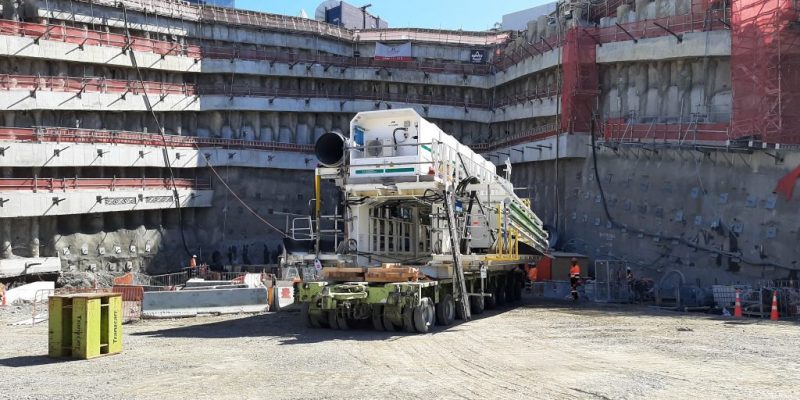 The primary sections of Dame Whina Cooper, the 135m long TBM (tunnel boring machine) are currently being assembled at the Mt Eden site in Auckland.

Florent Detraux, Link Alliance tunneling project manager clarified that the team is moving the gantries to the tunnel’s southern portal as it joins them up.

A truck with a multi-wheeled hydraulic trailer has moved the first four of the TBM’s 11 gantries into position near the entrance to the portal.

“Moving and aligning them into place is both a big and delicate operation,” Detraux stated. “Mt Eden’s a very busy construction site – there would be about 10 separate pieces of works going on around us at the moment – and the gantries weighing approximately 70t each are moved across uneven ground.”

He also added: “The team had to build a dedicated road and ramp down to the portal to support the move. Concrete slabs were poured by the portal, and rail tracks installed to position the gantries correctly.”

All the 11 gantries are going to be in place by mid-March, after which the TBM’s final piece, the front section or shield, will be linked. Moving the shield into the position will be another challenging operation, since its weigh is nearly 500t.

The gantries supply the mechanical, electrical and hydraulic power that the shield requires to bore the tunnels, clear the bored spoil and install the precast concrete segments that will connect the tunnels.

“Once the shield and all the gantries are connected, we will then put the completed TBM through some pretty vigorous tests and commissioning to ensure it is safe to begin its journey through the first tunnel,” mentioned Detraux.

The TBM will commence tunnel boring into central Auckland in late April.

The £2.3bn (NZ$4.4bn) City Rail Link, jointly funded and supported by the Auckland Council and New Zealand government will be the first underground railway in Auckland.