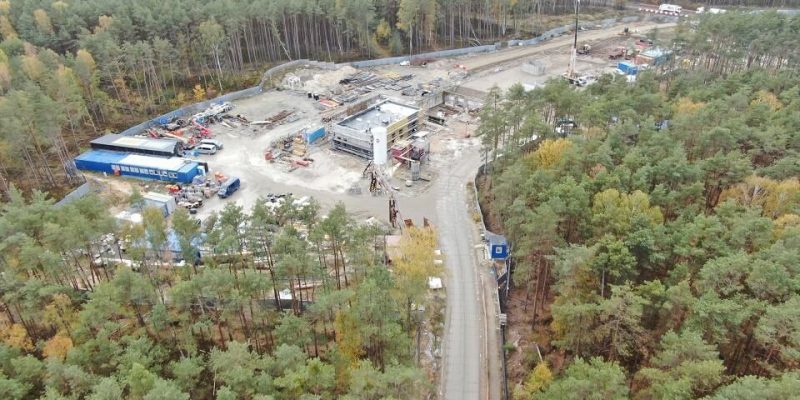 The building of energy-intensive barriers was finished in tunnel section T3 in October. At the emergency exit EE2, plus sealing the complete structure, U-type prefabricated elements and filigrees with the reinforcement of the road plate were placed.

At the EE2 emergency exit, concreting of the slab for the road was completed, and work on the installation of infrastructure was underway.

As for the Wolin island, diaphragm walls were sealed in the receiving chamber, among other things. Work resumed on the construction of the Trafo TK2 Station.

On Uznam island, in the VC1 fan house construction, work on the crane structure and its assembly were completed. The backfill of the western part of the beginning chamber beneath the road slab has also been finished. Hydrophobization of diaphragm walls was performed on the ramp (a process preventing water from penetrating in-depth into the wall structure). In the Service Center Office or the Trafo TK3 and TK1 stations constructions, work concentrates on interior finishing and installation of critical installations.

The closing of the intermediate floor was concreted and reinforced in the starting chamber last week. Also, the backfill in the western part of the starting chamber of the upper floor has been completed. On the ramp and in the tunnel, the façade’s (aluminum panels) assembly of the structure has been finished.

The construction of upper supports at the EE1 emergency exit in the tunnel has been done. While at the EE2 emergency exit, the works are yet continuing. The structures of both exits are sealed, as are the prefabricated elements.

In the receiving chamber on Wolin Island, the construction of the shaft structure and the staircase above the upper ceiling is continued, while the sealing of diaphragm walls has been completed. On the ramp and in the tunnel, finishing works are underway for energy-consuming barriers and pavement slabs, insulation for the road on the north side, and the facade’s assembly of structures. Cleaning and maintenance works are performed at the construction site. At the same time, bituminous works continue.