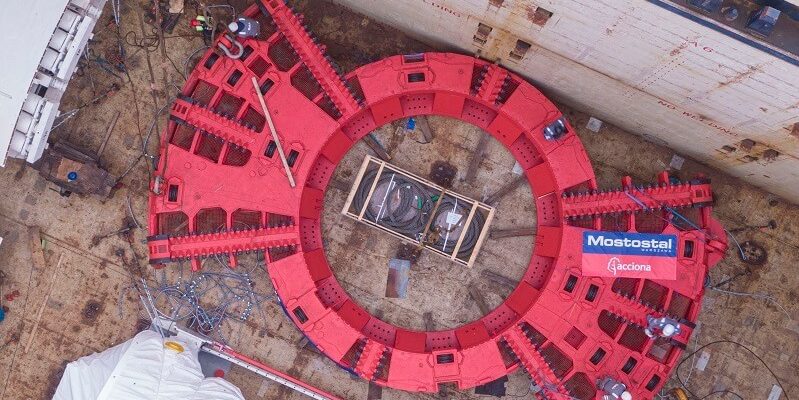 The greatest parts of the machine, i.e., the main drive and the cutting disc, have already been loaded on the barges (3 barges and 2 pontoons). The next stop will be at the port in Opole. At the same time, the other tunnel boring machines’ elements are moved. 40 transports (tractor + platform) have already left Szczecin, the next parts of the machine go straight from Spain.

As part of the investment, a new section of an expressway which is more than 10-kilometer-long, with a dual carriageway section, and two lanes in both directions, is going to be constructed.

Also, there will be a Babica junction (a trumpet junction) located near the intersection of DK19 and DW988. In addition, the scope of work comprises the construction of engineering structures, containing a tunnel with a length of more than 2 km, six flyovers, two viaducts over the S19, a collision-free passage over the railway line on the current DK19, three passages for animals and one passage beneath the S19.

The section of S19 from the Rzeszów Południe to Babica junction is one of the most interesting, but also technologically more challenging infrastructure structures in Poland. The hilly terrain needs the construction of high flyovers and a tunnel located up to 100 m under the surface. The complicated and complex soil and water conditions (Carpathian flysch) occurring at the planned investment site are also crucial.

The tunnel with a length of 2,255 meters (along the route axis) is going to have two aisles, which will be linked by 15 transverse passages and an extra emergency passage. Each of the individual aisles are going to be 12.4 meters in diameter.

Moreover, two technical buildings and a Tunnel Management Center will be constructed to secure the operation of the tunnel. The tunnel will meet the most stringent requirements for the safety of travelers (category A according to the international convention for the carriage of dangerous goods and goods by road – ADR).

Works on the tunnel boring will begin next year. The road tunnel will be built by mechanical drilling with the use of a TBM (Tunnel Boring Machine) and a drilling disc with a diameter of 15.2 m. The maximum depth of the works will be more than 100 meters.