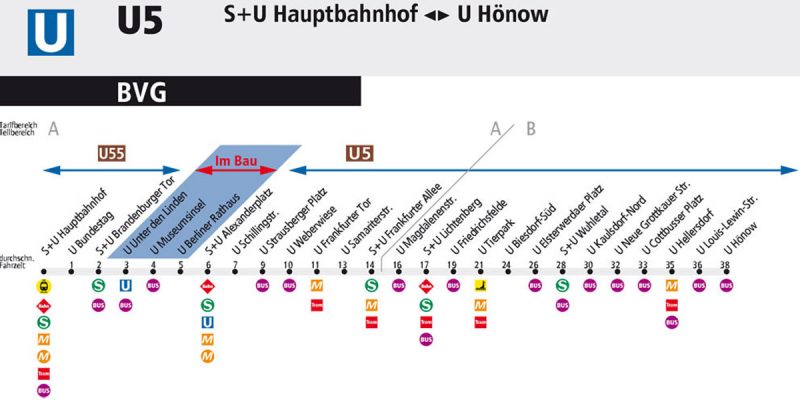 After almost a decade of construction and tunneling underground in Berlin, The Lückenschluss U5 is now open to passengers and commuters. Project owner Berliner Verkehrsbetriebe (BVG), Berlin’s main public transport company, has inaugurated the extended U5 line on December 4th. BVG Projekt GmbH, the principal contractor of the U5, has led the project since 2014 with the help of about 20 tunneling experts.

The 2.2km corridor connects the Brandenburger Tor to the Alexanderplatz through 3 newly built stations (Unter den Linden, Museumsinsel, and Rotes Rathaus) along the way. The section stretching from the Hönow terminus east, located at the border between Berlin and Brandenburg province, toward Berlin Hauptbahnhof (central station) west has a vital role in the public transportation system, enabling thousands of passengers daily to move through the city and avoid using vehicles. As a result, heavy traffics and congestion will be immensely reduced as more and more people use substitute additional direct and connecting routes to their final destination.